This year, although challenging due to the current pandemic, was very productive and exciting for Lisk. Now, 2020 is coming to an end and we would like to take this opportunity to summarize our most important accomplishments this year. There has been a multitude of research and development achievements, as well as other important milestones reached.

From the research on interoperability to the opening of Lisk Center Berlin, this blog post covers the highlights of Lisk in 2020. At the end of this blog post, we will cover as well some of the things we are most excited about for 2021.

The Lisk development achievements in 2020 were impressive. So far, we have more than 2600 Lisk SDK downloads on npm. On the GitHub repositories, we had more than 19,500 commits and we implemented 35 LIPs (Lisk Improvement Proposals) in our codebase. All these great accomplishments make Lisk one of the most actively developed blockchains in the entire industry.

The Launch of Betanet v3 comes with the Lisk SDK 3.0.2 and Lisk Core 3.0.0_beta.0 releases, and all the objectives of the Security and Reliability phase were implemented.

The Launch of Betanet v4 comes with the Lisk SDK 4.0.0 and Lisk Core 3.0.0-beta.1 releases, and all the objectives of the Economics and Consensus phases were implemented.

The Launch of Betanet v5 comes with the Lisk SDK 5.0.0 and Lisk Core 3.0.0-beta.2 releases, and all the objectives of the Network Longevity phase were implemented.

Lisk for Desktop is the primary application for interacting with the Lisk blockchain. In 2020 we had 5 releases bringing the following new features and improvements:

In September 2020, we released a new product as part of the Lisk ecosystem - Lisk Service. This product offers the possibility to access and browse Lisk’s blockchain data by providing accessible and powerful new API calls. Lisk Service, fully written in JavaScript, acts as a service layer between blockchain data and user interfaces. It can be used with any blockchain application built with the Lisk SDK.

In May 2020 we announced that the research of the four protocol roadmap phases “Security and Reliability”, “Network Economics”, “Network Consensus”, and “Network Longevity” was completed. In total, there were 35 LIPs completed and merged into GitHub.

These protocol changes will be part of the Lisk Core Mainnet release in 2021. The changes for each phase were summarized in a blog post and a series of blog posts for each specific topic was published on the official Lisk blog.

The year 2020 has been a very important one for the research on interoperability. Since the beginning of this year, the team started the research for the last phase of our roadmap: “Blockchain Interoperability”. The research team analyzed papers and other projects in order to identify available technologies. Then, they analyzed the possible solutions to get a better understanding and afterward, together with Max and Oliver, decided on a general high-level direction for the Lisk interoperability.

The Lisk marketing efforts in 2020 were strongly focused on developers. We have been supporting the development of proof of concept blockchain applications built by community members, in order to showcase the possible use cases for Lisk SDK. Besides attracting new developers in our ecosystem, we have been also working hard on engaging with our existing community.

We opened up two new Lisk Centers; one in Berlin and the other in Tokyo, which will facilitate collaborations between blockchain developers. We have also been more engaged with our community members on social media channels and Lisk.chat through regular updates and AMAs. More about the marketing achievements for Lisk in 2020 can be read below.

With the Lisk Center Utrecht already successfully running in the Netherlands, we wanted to offer our community in Japan a place to meet, to organize events, and to build connections. Therefore, we decided to partner with BINARYSTAR, a business hub in Tokyo, where currently the Lisk Center Tokyo is located. In 2020, we officially announced that community members in Japan have a place to network, where newcomers will also get the chance to learn about Lisk through diverse meetups and offline marketing materials.

As one of our biggest efforts this year, we kept our promise to open the Lisk Center Berlin, a coworking space for our local community in Germany. This space is dedicated to building blockchain applications, networking with local developers, and hosting events. On November 20th at Lisk Updates, the online event livestreamed straight from the stage in Lisk Center Berlin, we finally revealed the Lisk Center and the benefits it has to offer. 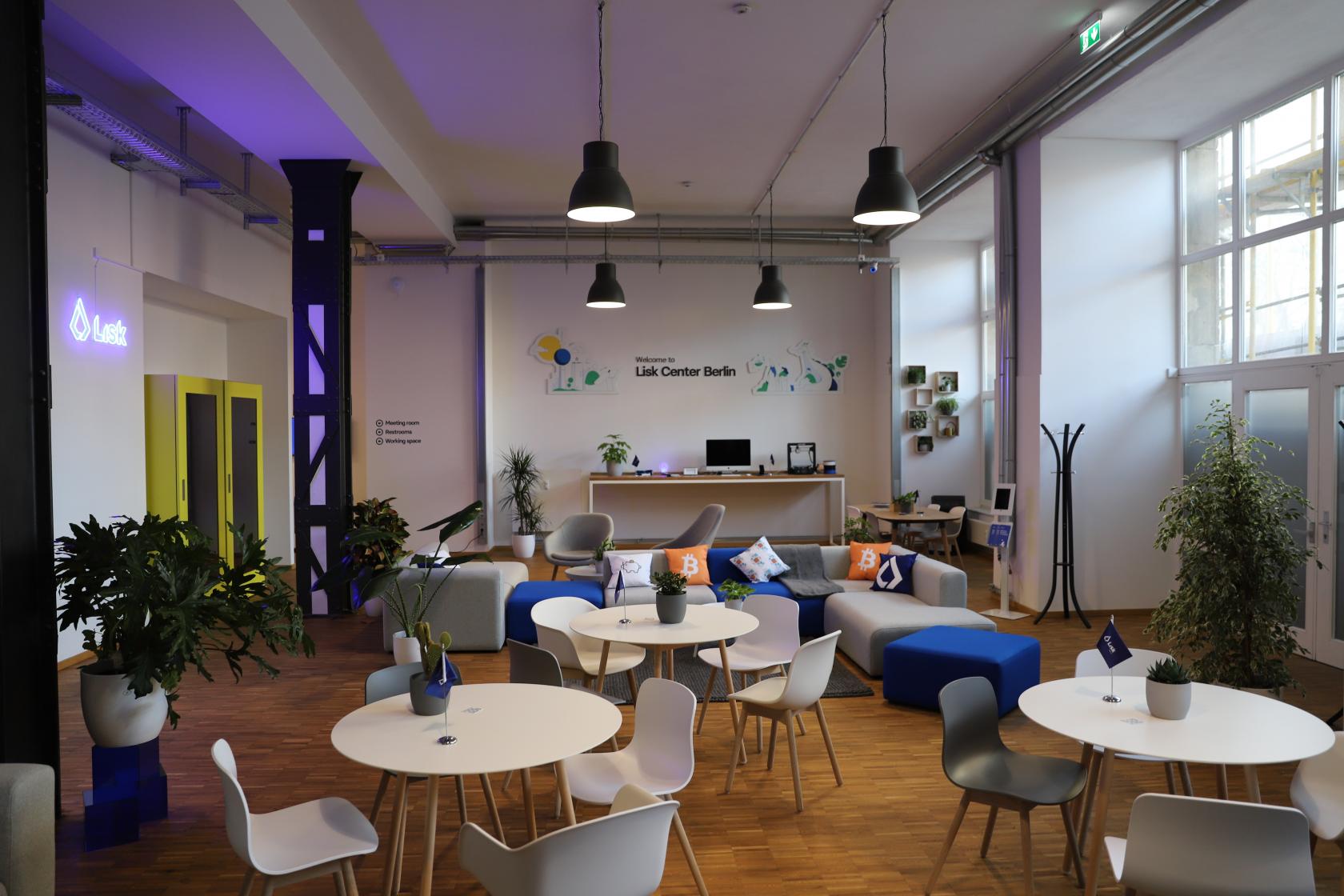 Considering the current situation around the world, our plans for attending events were drastically changed this year. However, like everyone else, we moved our focus and efforts to online events. We have attended two online conferences: one blockchain research-oriented by Chaintalk where Iker Alustiza, Research Scientist, presented the Lisk’s Delegated Proof of Stake Algorithm, and one for a developer audience by WeAreDevelopers where Nazar Hussain, Senior Backend Developer, showcased how to build a blockchain application with Lisk SDK in JavaScript.

Besides these conferences, we organized our own online event, Lisk Updates livestreamed from the Lisk Center Berlin. This event included the introduction to the Lisk Center Berlin, important development updates, a live coding session showing how to build NFTs with Lisk SDK, a first glimpse at the Lisk interoperability, and a live Q&A.

On our Lisk.chat this year we hosted 10 live AMAs (Ask Me Anything) for diverse topics. For each research-focused blog post published, we also organized an AMA in order to give the community the chance to ask questions related to the research progress, the new protocol features, and the interoperability research efforts.

Moreover, we hosted AMAs with our development team for the most important releases we had this year. At the end of this year, our last AMA on Lisk.chat featured Max Kordek, CEO and Co-founder, who answered diverse questions about the Lisk project, the marketing plans for 2021, and much more. A recap of this end of the year AMA can be read in the blog post.

In 2020, we published 74 blog posts on the official Lisk blog. These blog posts cover monthly achievements, proof of concept blockchain applications, Lisk research-related topics, releases, and much more. We have also been covered in media outlets from around the world such as BTC-Echo, Coinpost Japan, Cointelegraph, BTCManager, and many others.

Besides these articles, we have also been interviewed by U.today, BTC-Echo, and Far East Blockchain.

One of our goals this year was to increase our developer community and to attract new people to our platform. Therefore, we implemented the Lisk Builders program, which offers incentives to developers to build their own proof of concept blockchain applications with the Lisk SDK.

So far, we had more than 60 candidates from around the world applying for this program. 18 proof of concepts were chosen to be built by community members and newcomers into the Lisk ecosystem. These blockchain applications prove the accessibility of our products and inspire blockchain developers to experiment with the Lisk SDK.

These have been the highlights of Lisk in 2020. We are striving to perform even better in 2021, a very important year for Lisk. Below we listed some of the things we are looking most forward to.

Once the external security audit conducted by Least Authority is completed and Lisk Desktop 2.0.0 has been released, we will start the planning for our testnet and mainnet releases. Our next important release will be of Lisk Core 3.0.0 to Mainnet which will be released as a single major update. This release will include the features of all the previous phases. The Lisk SDK documentation and the Lisk Core documentation will be updated as well in order to reflect all the changes implemented and to support developers in building blockchain applications.

All the interoperability LIPs, drafted based on the interoperability specifications, will be revealed at Lisk.js 2021 in spring. Lisk blockchain will become the directory for all Lisk sidechains. The LSK token will play a central role on the Lisk blockchain application platform and it will be used for transaction fees on every sidechain. We will be able to facilitate mainchain to the sidechain, sidechain to mainchain, and sidechain to sidechain cross-chain transactions.

Once the LIPs specifications are published, we will be starting the implementation of interoperability. Blockchain Interoperability is the final phase of the Lisk protocol roadmap. Once the Lisk SDK moves from the RC (release candidate) stage to the Production stage, we will be able to fully launch the Lisk blockchain application platform, including the first production blockchain applications.

As mentioned above, we had a very successful Lisk Builders program in 2020, with many proof of concept blockchain applications built by developers. However, we now pass that phase together with Lisk SDK entering the beta stage. In 2021, we plan to restructure the Developer program by modifying the format and incentive in order to facilitate the building of production blockchain applications, modules, and plugins by blockchain developers who are part of the Lisk ecosystem. More details about the new program will be revealed in the first months of 2021.

In 2021, we plan to attract more blockchain developers into the Lisk ecosystem. Therefore, we will be hosting external developer meetups in the Lisk Center Berlin in order to inspire newcomers to get to know Lisk and to start building blockchain applications with the Lisk SDK. We will make use of this new coworking space dedicated to the Lisk community to organize workshops, hackathons, online and offline meetups. Now that we have three Lisk Centers around the world, we plan to strengthen the collaboration between them through merged events and community meetups.

And that’s a wrap! We are very grateful to our community members and partners for their continuous support and engagement in making Lisk successful. 2021 will be a great and important year for Lisk and we are excited to share with you our achievements in the upcoming months.