The month of September saw our developer teams progress with the SDK and Lisk Builders get with experimenting with our toolkit. There are also some exciting news from our UI team for hardware wallet fanatics. Here are the main takeaways:

Lisk SDK 2.3.6 was released to resolve instability on Mainnet caused by older versions of nodes

We released Lisk SDK 2.3.6 along with four patches (2.3.3 to 2.3.6). The development team responsible for the implementation of the new P2P layer for Lisk focused on resolving several issues which happened when the new 'Partial Network' nodes interacted with older 'Full Mesh Network' ones. When releasing to Mainnet, we found that broadhash consensus among nodes was lower than usual. The main reason for this was due to low block propagation caused by the peer selection function unevenly sending blocks between 'Inbound' and 'Outbound' peers (#4271). This was resolved by ensuring that half of a node’s peers are selected from the inbound list and half from the outbound list. We further stabilized broadhash consensus by adding a periodic “update status” job on outbound peer connections to keep the node up-to-date (#4261). Another issue was found in which peer buckets were growing over the specified limits. The fix to this issue should allow for more efficient use of resources (#4279). For more information on the topic of new nodes, check out our previous LiskDevUpdate.

The 'lisk-p2p' Library is Getting Ready to Add More Features in Lisk SDK 3.0.0

Finally, the team worked on improving both unit (#4227) and integration (#4199) test coverage for the 'lisk-p2p' library in Lisk Elements, as well as refactoring code to resolve a cyclomatic complexity issue (#3859). With better test coverage, 'lisk-p2p' library development can speed up by being able to identify issues earlier and with ease.

This month we hit a major milestone towards finishing the development of Lisk SDK 3.0.0, which is scheduled to feature Lisk’s new BFT consensus. The development of the ;DPoS module has been completed ((#3680) and we already replaced it with the old& Rounds module. All code and database components related to the old Rounds module have been removed (#3685). And of course, we added full unit and integration test coverage for the _DPoS_module (#4249). DPoS module is currently being tested against Testnet and Mainnet (#3686). We found that some exceptions on our Testnet are not compatible with our new implementation and are breaking syncing (#4194). However, this problem doesn’t exist on Mainnet. You can read more about the upcoming BFT consensus in Nazar’s post on Hacker Noon.

Alongside that, we completed some of the other essential and shared components of Fast Chain Switching and Block Synchronization mechanisms like restoring blocks from temporary storage (#3775).

Last month, we released the final version of Lisk Hub 1.21.0 with several handy features. You can find out more about them in our previous dev update.

<h3Lisk Hub 1.22.0 will add support for the Trezor One hardware wallet

We keep on improving support for hardware wallets in Lisk Hub, having already included Ledger Nano S, Ledger Nano, X, Trezor Model T. During the development of this release, we have spent a considerable amount of time on refactoring the whole hardware wallets module to make it more modular and abstract away API differences of individual vendors. We did this to make adding support for a new hardware wallet as easy as possible and involves only writing a module that converts the vendor-specific API into a common API for all hardware wallets.

WIth this in place, it was pretty straightforward to add support for Trezor One. The only specific of this hardware wallet is how the device is unlocked by PIN. All the previously supported models handle entering PIN by their own buttons or touch screen and don’t require any support in the desktop app for unlocking the device. If the device is locked, it doesn’t even show up on the desktop app. Trezor One, however, uses a blind metrix (for more info see official Trezor docs) for entering the PIN. To solve this, we have implemented the PIN page (see screenshot below). This update is aimed for Lisk Hub 1.22.0. 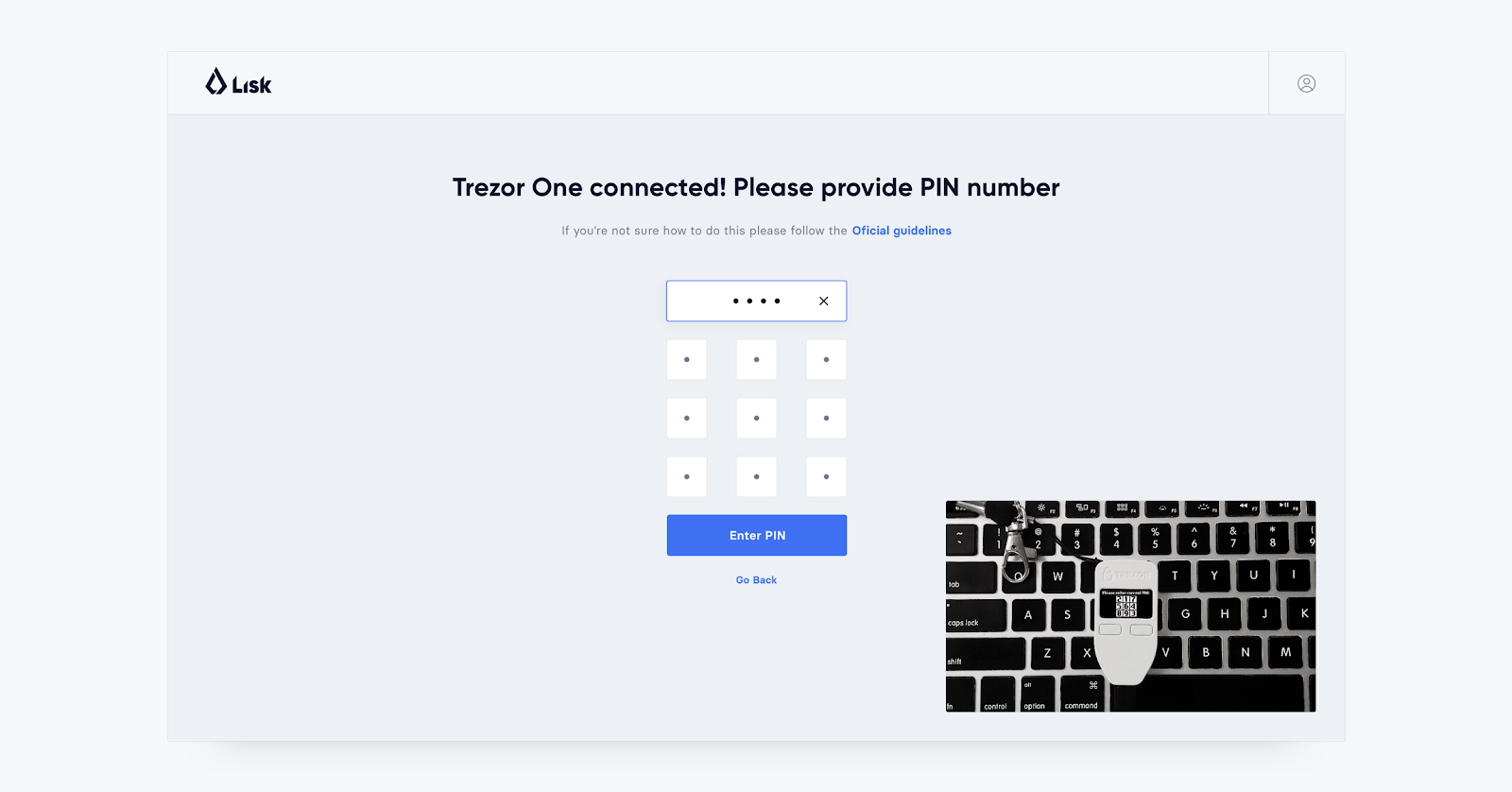