Every year the Lisk team hosts an event to reflect and celebrate on the progress made in the previous 12-months, as well as to look ahead and get excited for the goals and achievement for the upcoming year. This year, that event, called 365: An Event by Lisk, took place at the Lisk Center Berlin on Thursday November 24th, 2022.

As with most major Lisk events, it was live streamed for those who could not attend in person. 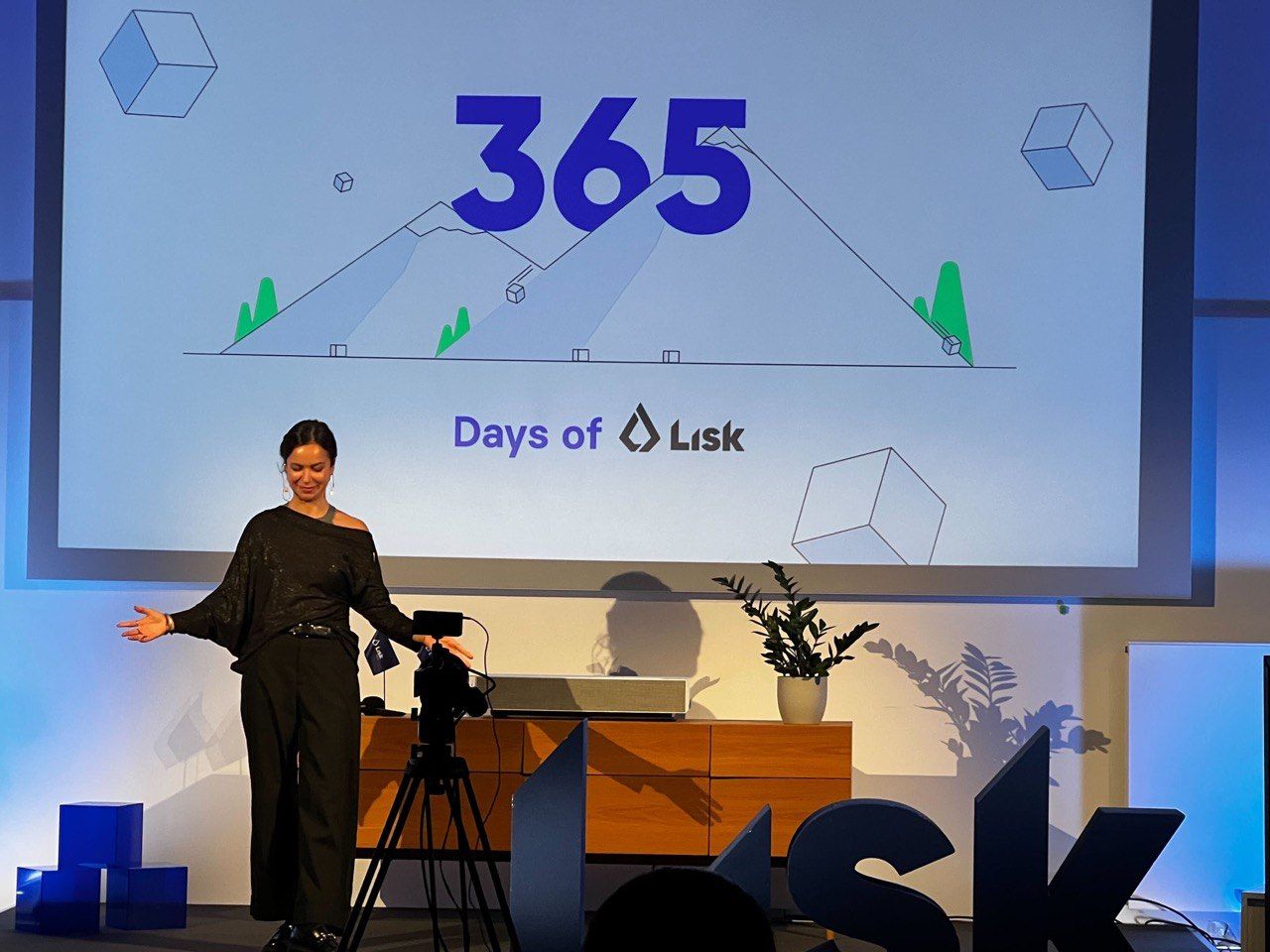 Following a brief introduction of the event from Lisk’s Event Manager, Thais Ribeiro, who hosted the event, Max Kordek, Lisk CEO and co-founder, took the stage. He opened up by acknowledging the current bear market that crypto is currently in, but stated that it can be an advantage as it solidifies the importance of decentralization.

“Now, more than ever before, we really have to focus sharply on the true values of Web3 and not let us be guided by the wrong ones.”

Max then reflected on 2022 and the accomplishments it brought for Lisk. Over 30 Lisk Improvement Plans (LIPs) were finalized and published by the research team. The development team fully implemented the Lisk platform, which is currently undergoing alpha testing. The marketing team, now under a new Chief Marketing Office (CMO), Marcell Nimfüehr, quadrupled in size to prepare for the upcoming marketing storm of 2023. Overall, it was a phenomenal year for Lisk.

The focus then shifted to the upcoming year, which will finally see the launch of the Lisk Platform. Max stated that there will be a global effort, with a strong initial focus on countries such as Germany, Netherlands, Portugal, United Arab Emirates, United Kingdom, and United States. While Lisk is a complete ecosystem, another strong initial focus will be put on recruiting founders and startups over other target audiences.

Monica Tartau, Lisk’s Head of Marketing, then took the stage to discuss how the Lisk team has grown over the past year, and what that means for the future. She started off by saying:

“It became clear to us that we have to take a step back in order to take two steps forward. For way too long we tried to follow our industry peers instead of setting ourselves up for success.”

She then explained that the Lisk team is very diverse, and has successfully scaled up to 72 members. She also explained how at this time last year there were only 4 members of the marketing team, whereas today there are 15, all of whom are inspired by Lisk’s new CMO, Marcell.

Monica then closed her presentation out by expressing that 2023 is the year that we are all looking at for a change. She ended by stating:

“Lisk has to stand for something. We will make sure that everyone will know what that something is.”

An overview of the Lisk Grant Program was then given by Lisk’s Business Development Lead, Dominic Schwenter. Dominic explained that the program is now 18 months old, going through 5 total waves. So far there have been well over 100 applications, with a total of about 20 projects currently part of the program itself.

Dominic then gave an update on two of the current participants. The first was that the social media NFT platform, Enevti, was listed #1 for NFT platforms built by Indonesian backers or founders by CNBC Indonesia. This was very exciting for them to receive that kind of recognition in Indonesia, which is one of the largest markets in the world and is at the heart of real world crypto usage adoption.

Next was an update on Kalipo, a platform which supports Decentralized Autonomous Organizations (DAOs), founded by Peter Nobles. Peter has been working on a program called Lisk Labs at the University of Utrecht. Recently they have been conducting a pilot course for teaching students at the university on how to build their own DAOs. Even more exciting is that they are currently in talks to make that program an ongoing program as part of the university curriculum!

Dominic then expressed that he wished he had enough time to go over all of the Lisk Grant program participants. However, he wanted to go over two additional applications, Topas City and Bazar.

Topas City will be a VR Metaverse. There will be endless possibilities for developers and artists to develop their own experiences inside this world. They have recently launched a beta testnet, which Dominic says he has taken a look at himself and was impressed.

Next Dominic took some time to go over the Bazar project, which was founded out of Colombia. The goal of the project is to create a marketplace for many of the raw commodities that come out of South America, like coffee and cocoa beans, that is backed by the blockchain. This will allow producers and buyers from around the globe to facilitate their transactions through this process.

Dominic wrapped his presentation up by providing a teaser for some future announcements for the Lisk Grant Program. The first is that a new program will be launched in Q1 of 2023. This program will include better support for developers. It will also include bringing in some outside partners to share their expertise. This could include areas of development, marketing, and community.

Finally, Dominic announced that funding for the new program will be overhauled. In order for projects to be successful, we need to provide them with the funds to build their ideas out. In the new program, funding will be much more dynamic. We are very pleased to announce that in the future, projects may earn up to CHF 250,000 in funding!

The crowd was very pleased to see Miguel de Sousa, Lisk’s Community Lead, come up on stage next. After thanking the audience, Miguel announced that there are currently over 10,000 members in the community Discord channel (lisk.chat). While that is an exciting number, he stated that the team is aiming for 100,000.

Miguel then teased his community magic announcement by asking ‘Who likes Christmas?’ He explained that Santa’s elves are sick and tired of doing the same thing over and over again, and that they are just ‘Meh’. Just then, a picture came up on the monitor showing the next batch of Lisk collectibles, called ‘Mehlves’.

There will be 112 collectibles, redeemable on Liskscan.com, with 3 different rarities. An airdrop is planned for the 12 Days of Christmas, with 5 being given away each day. The remaining collectibles will be saved for future giveaways. And as a special bonus, recipients will also receive LSK token prizes!

Next up were Content Managers Tony Morinello and Edward Trosclair to talk about the upcoming revamped Lisk Ambassador Program. Tony started off by explaining that this is in fact the 3rd iteration of the program, and that lessons have been learned from the previous two. He went on to explain that the Ambassador program itself is not enough, as it leaves out many talented community members who should be recognized, motivated, and rewarded for their contributions.

The Lisk Assistants Program is a program where community members can be rewarded for assisting other users across our various platforms. These include lisk.chat (Discord), Telegram, and Reddit. This will allow all community members to receive more reliable support when they need it most. In addition, it gives members that are part of the program the opportunity to earn LSK tokens, as well as the ability to learn more about Lisk itself.

The Lisk Community Bounty Program was created to get the most out of all the various talents of the Lisk community by incentivizing them. While details are still being worked, bounties may include things like testing out new Lisk documentation, creating a Lisk help guide, filming a Lisk related video, building some sort of Lisk related art, or launching a community tool.

Tony then introduced Edward to discuss the Lisk Ambassador program. Prior to becoming an official part of the Lisk team, Edward was actually a member of both previous iterations of the program.

Edward explained that the idea of the Ambassador program is to grow local and regional communities into thriving hotspots for Lisk. Ambassadors will include blockchain enthusiasts, talented marketers, and university students.

The goal is for ambassadors to provide local insights, forward business relationships, and educate and empower their communities. They'll accomplish this by starting their own meetup groups and hosting events such as hackathons, meet ups and workshops.

Lisk Vision for the Future with Marcell Nimfüehr 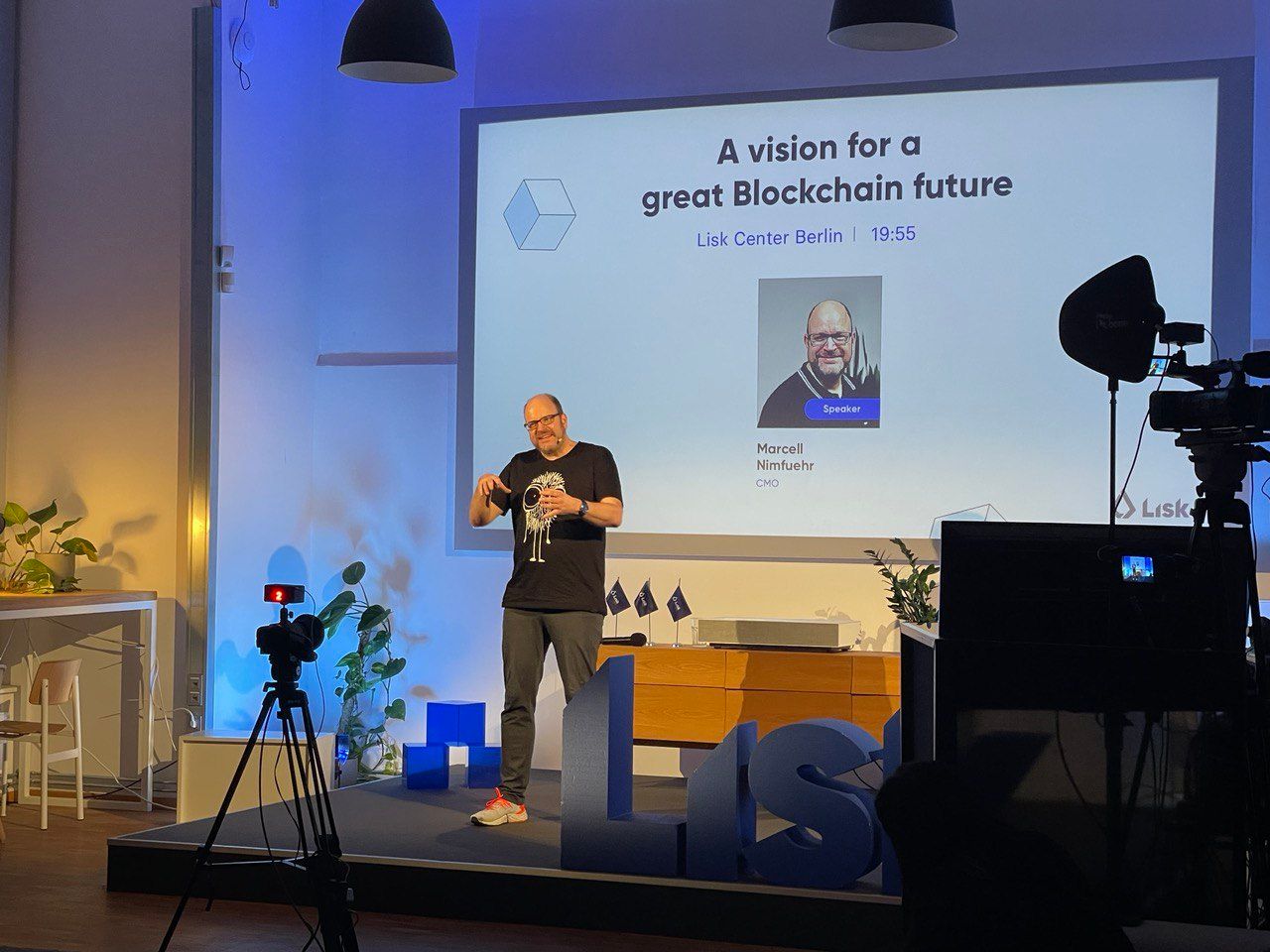 To headline the 365 event, Lisk’s new CMO, Marcell Nimfüehr, took the stage to explain his vision for Lisk in 2023.

Marcell started off by explaining a sad reality. He explained that for the first time in human history, more than 50 million people live in some form of slavery. While there are many factors, an underlying issue is the lack or the loss of identity documentation. He explained that people in vulnerable communities either have never had a birth certificate, or have had their passports taken away. Either way, this provides a significant challenge when trying to flee.

Marcell proposed that this could make for an excellent blockchain use case. Users could put identity documents, such as a photo, passport, or birth certificate, on the blockchain. This would provide a sort of fingerprint to prove your existence.

“For us in industrialized nations, that's just a nice thing to have. For people in vulnerable communities, it's a matter of life and death. Imagine if we can use Blockchain to help these people.”

Marcell then explained that making a difference was one of his primary motivations for joining the Lisk team two months ago.

Shifting gears, Marcell reflected on the crypto crash in May 2022. He explained that he thought about all the things that were hyped in the last 2 years leading up to it, which included NFTs, DeFi, and real estate on the Metaverse. He realized that they all have one thing in common, and that is the motivation for people to engage with them is solely to earn money.

The epiphany Marcell had is that when everybody wants to earn money, the likely outcome will be that nobody will earn money. Therefore, what we need are applications and use cases where people want to spend money, not earn.

Following explanations of two more potential blockchain use cases (a supply chain, and a micro donation app for Youtube content creators), Marcell then concluded his presentation by stating that a major focus to accompany the Lisk Platform launch this coming year will be on valuable use cases. It is crucial that we find, research, develop and launch these applications for Lisk. 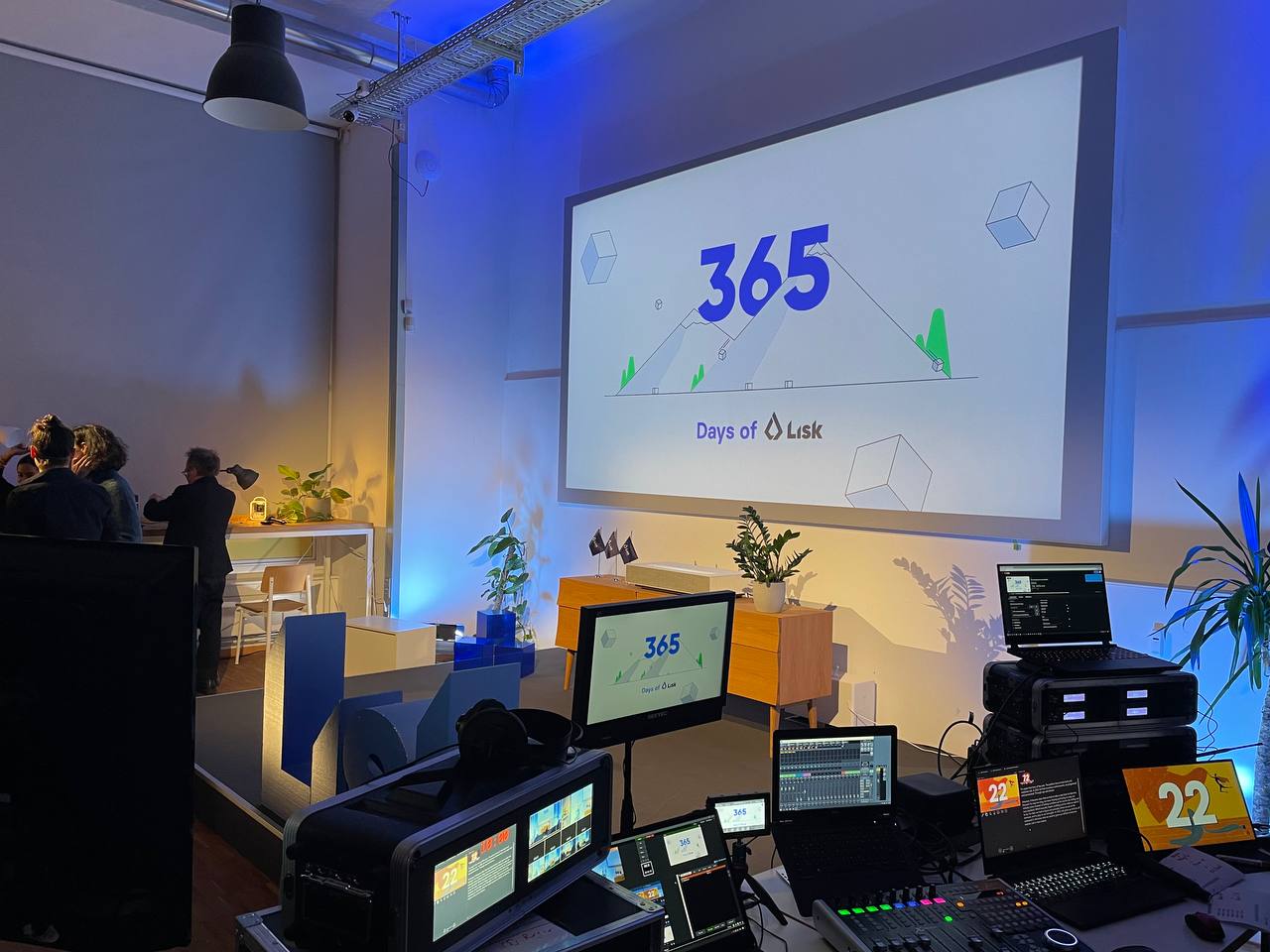 Lisk has been going strong for over 6 years now. While the Lisk Platform Launch has been a long time coming, it is an exciting time as it will finally launch in 2023. It is truly an exciting time to be involved in the Lisk project as the vision is about to become a reality.